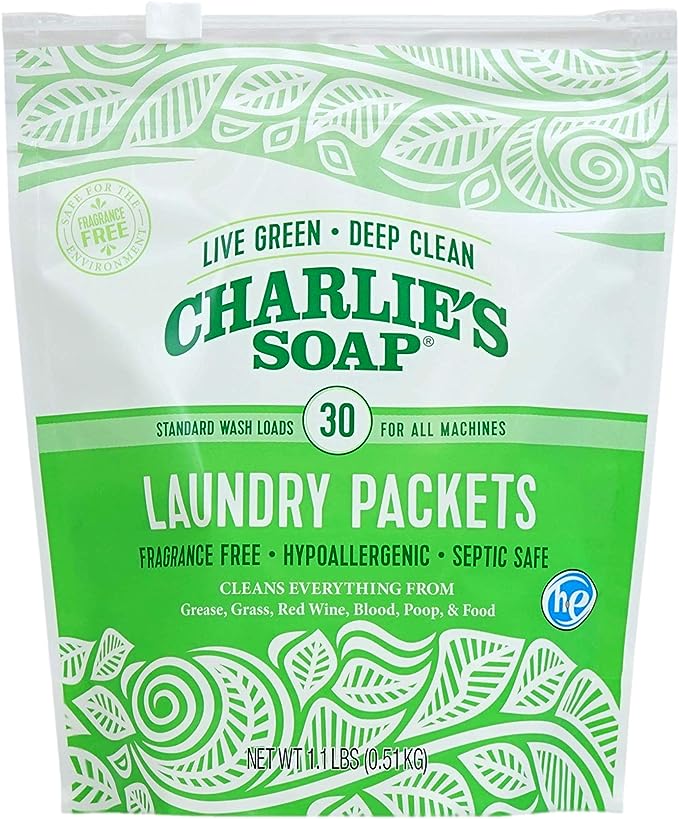 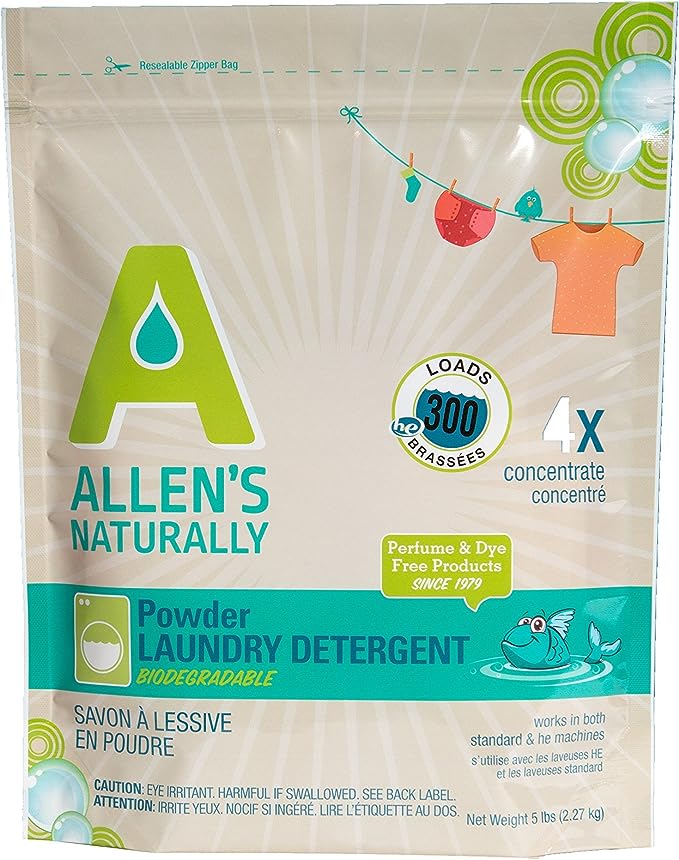 We have all heard the dangers of harsh cleaning chemicals and the risks they pose to the earth and to our health. Most of the leading store brands contain known carcinogens in the ingredient list. Many of us do our best to choose cleaning products that are free from the common irritants that build up on our fabrics leaving behind residues that wreak havoc on our skin and respiratory system. It can be overwhelming sifting through all of the information out there and then taking that information to the store and scanning the ingredient lists.

This guide will give you an overview of the top five safe and natural laundry detergents based on product descriptions and reviews. You are sure to find the most eco-friendly laundry soap to keep your clothes and linens fresh and safe!

This hypoallergenic, cruelty-free, fragrance-free laundry soap is a favorite of natural-minded folks. It is 100% biodegradable and hypo-allergenic. It can be used on all fabrics including silk, cotton, and polyester. Yes, you read that right; you can use Charlie’s on silk. It’s extremely unusual for a laundry soap to be safe and gentle enough to use on silk fabrics, so this is an area where Charlie’s really shines.

Charlie Sutherland Sr., the founder of Charlie’s soap, was tasked by his father to invent a cleaner that could be used for the textile machines in the factory he owned. However, there was a catch; the cleaner had to be effective enough to clean the oils from the textile machines but gentle enough that it wouldn’t be harmful to the elderly cleaning ladies. There would also be large amounts of the cleaner going into the local wastewater treatment plant, so it had to be acceptable to city officials. And so, Charlie’s soap was born, first as a cleaner for the machines, and later as a cleaner for the textiles themselves.

Traditional detergent can’t be used with cloth diapers. Its residue repels liquid from the absorbent diaper cloth and renders them useless. Charlie’s laundry soap, on the other hand, is a favorite for cloth diapering mamas because it doesn’t leave any residue.

The 5 lb bulk bag of Allen’s Naturally Laundry Powder will wash up to 300 loads of laundry, making this an excellent choice if you’re looking for value. Since 1979, Allen’s has been a trusted brand of laundry soap and has had consistently high customer satisfaction rates.

Allen’s was initially marketed as a detergent for cloth diapers, but parents everywhere began to realize it was equally excellent for cleaning all their family’s clothing. It does an especially good job keeping whites bright and stain-free.

Using Allen’s is helpful to the environment in several ways. First, it is biodegradable and free from harmful chemicals. Also, because it is 4x concentrated, fewer materials are needed to create packaging. Imagine how much plastic would be wasted if you bought 300 loads worth of traditional liquid laundry detergent. You would end up with several large plastic bottles to discard. With Allen’s, you get 300 loads of deep cleaning power in a relatively small bag, creating minimal waste. 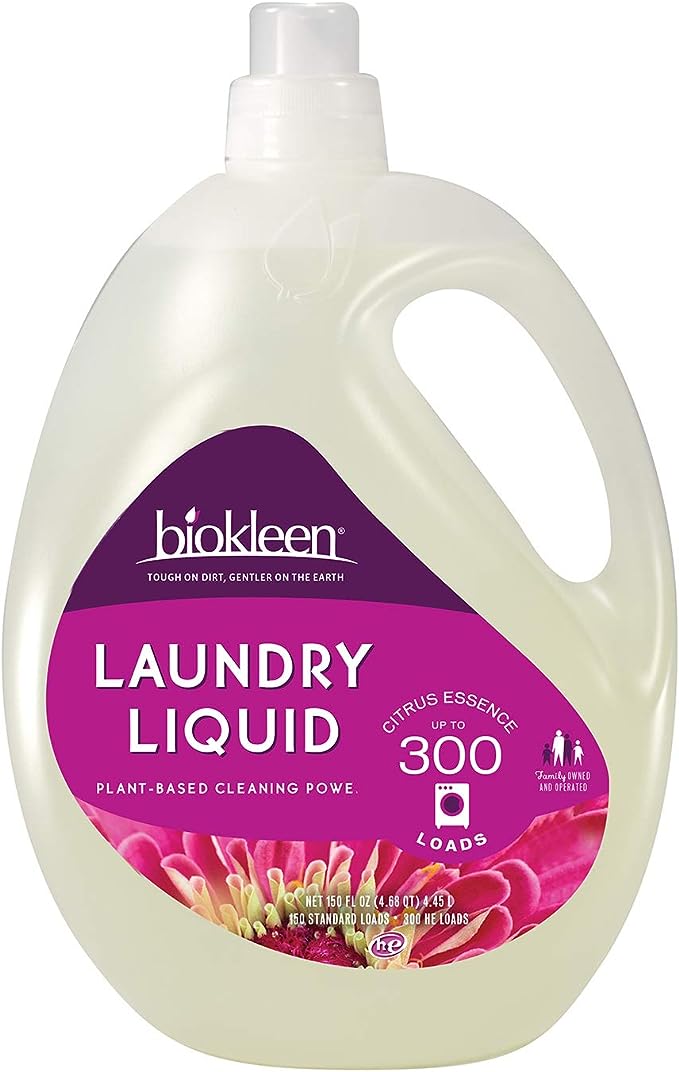 Biokleen has been a family-owned and operated company since its inception in 1989, and all products are manufactured in the USA. BioKleen offsets 100% of its carbon emissions by purchasing blocks of wind power. BioKleen uses green manufacturing practices: no products other than BioKleen are produced in the same facility. This means there is no potential for chemicals from other hazardous products to cross-contaminate BioKleen’s products, so you can be confident in their safety and purity.

BioKleen is safe for grey-water systems and fully biodegradable. Its active cleaning ingredients are all plant-based.

Puracy has only been in business for six years, making them the youngest company on our list. The commonality they share with other natural laundry detergent manufacturers is that they are family-owned. They are also completely US-based: operations and manufacturing take place in Austin, Texas.

Soap nuts are an inventive laundry solution and can also multitask around the house. Here’s how they work, in a nutshell: “Soap nuts” are actually a berry, so you can still use these even if you have nut allergies. The berry is the fruit of the Sapindus Mukorossi tree, which grows wild in India. The “soap nut” berries contain naturally occurring saponins, which act as a cleaning agent. Eco Nuts are the most natural laundry soap on this list. There’s nothing added; the single ingredient is the “soap nut” berry.

To use soap nuts, place several into the cloth bag included with your purchase. Then, just toss this into the washing machine and proceed as normal. Soap nuts will last through about 10 washes. When they’re ready to be discarded and swapped out for fresh soap nuts, they’ll be almost completely decomposed. You can toss the remaining shell into your compost bin, making soap nuts truly zero-waste.

One of my favorite advantages of soap nuts is that they work equally well for handwashing and machine washing. If you want to hand-wash your clothes with soap nuts, just let them sit in a bowl of warm water for 5-10 minutes before washing your delicates. Soaking the soap nuts first makes sure the saponins are released.

Each of the five natural laundry soaps provided on this list has an ‘A’ score from EWG, the most highly trusted environmental watch group. Since all these products have an equal EWG score, you can be assured they’re all safe. But if they’re all equal in safety, how do you pick the best product for your family? Read on to find out how to pick the perfect natural laundry detergent for your needs. 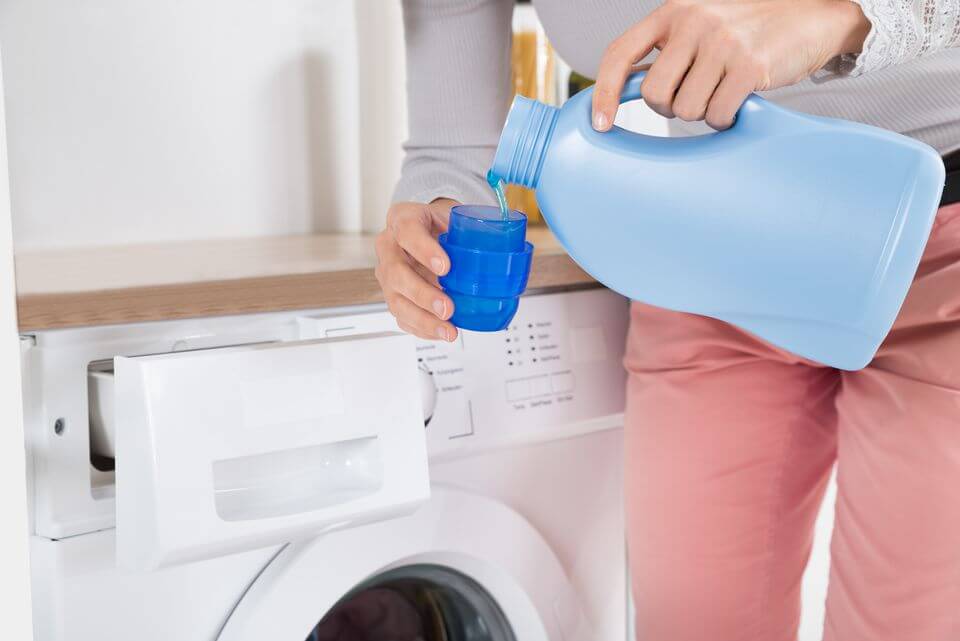 Things to consider when selecting a laundry soap

Making the switch to eco-friendly, natural laundry detergents has many positive impacts. It’s great for the environment. Natural laundry soaps are manufactured without hazardous chemicals, and their production facilities often implement green manufacturing practices. They’re also great for your home environment; you can use natural laundry soaps with grey-water and septic systems. They’re free of dangerous chemicals and fully biodegradable, so you don’t have to worry about contaminated water runoff being consumed by chickens or other animals on your property.

Natural laundry detergents come at a variety of price points, so no matter what your motivation or your family’s needs, you can find the perfect eco-friendly laundry soap.

Beyond2015.org participates in the Amazon Associates Program, an affiliate advertising program designed to provide a means for sites to earn commissions by linking to Amazon. This means that whenever you buy a product on Amazon from a link on here, we get a small percentage of its price.